Searching for new Sherlock Holmes cocktails I was happy to come upon Nerdy Recipes “Irena Adler” cocktail, named after Holmes’ enchanting female rival from “A Scandal in Bohemia” (I wrote about the story here). The recipe was a bit challenging, prompting me to make rose water and buy matcha tea powder and rhubarb jam for the first time.  I know, shocking I didn’t have those ingredients on hand 🙂

Anyway, I’m glad I went for it, as the Adler is a really, really interesting drink.  I was a little nervous because the final color looked darker than I expected, but I enjoyed both the gin and vodka versions.  The dominant taste is the matcha powder which lends a subtly spicy, heavy black tea taste.  It’s heavy and powerful, rich and herbal.  I was also surprised how “unsweet” it was — I thought with the lemon and cranberry juice it’d be a bit fruiter, but no, it’s a slightly bitter, dark, and mostly intriguing taste.  The tea, the tea though, that’s the big thing.  Not much of a difference between the two variants although I thought the vodka one went down a bit smoother.  Worth giving a shot! 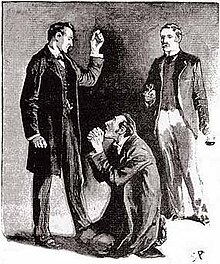 For this installment I picked “The Adventure of the Blue Carbuncle,” the perfect story for the season as its the only Sherlock adventure set during Christmastime.  This is a great story and so well written; when Doyle writes of Holmes and Watson walking through the falling snow to a London bar, you can easily imagine the simple beauty of that Victorian scene.  The case, dubbed a “whimsical little incident,” by Sherlock, involves a stolen blue jewel and an unlucky goose.  The reader will learn a lot about the Victorian poultry industry and supply system, which Holmes uses to track down the jewelry thief.  In the spirit of, as he calls it “the season of forgiveness,” Holmes lets the cornered perpetrator go free, convinced he’s been scared straight.  Tis the season.