The place to be on a summer day in Tysons, Barrel and Bushel offers a bright, airy setting and plenty of good drinks.

I was already on a soapbox declaring Tysons Corner the future of America in my previous review of Eddie Vs, so no need to sound that horn again.  Suffice to say, the new constructed public areas near the Galleria, anchored by fun restaurants like Shake Shack and this week’s reviewee (is that a word?) Barrel and Bushel, make it an exciting time to be in the area.  I headed over to the bar last week to give it a go – the first trait that strikes one when entering the beautiful bar/restaurant is how…open it feels.  Seamlessly incorporated into the new overwalk common area, the atmosphere at the bar becomes one dripping in summer fun; almost a beach party vibe, as long as your beach party includes throngs of well-dressed young professionals.

And what’s better to keep that vibe going than cocktails!  Overall the cocktail selection was diverse and fairly good; no standouts and a few mediocrities, but enjoyable.  Let’s start with the Jefferson’s Perfect Manhattan, an audaciously named and beautiful drink that I found strong but not overpowering and surprisingly pleasant.  It braces you but holds your hand throughout and doesn’t throw you off a cliff.  And you get a cherry, so who can complain?  Numero dos was the Blueberry Ginger Caipirinha, which makes for the second Caipirinha I’ve had this week: #squadgoals.  Made of fresh blueberry, cachaca (a distilled sugarcane-based liquor), and ginger simple syrup, I was excited for this one because of my blueberry cocktail fixation, but I felt it was a little flat and watery; it’ll do in a summer pinch, but I was hoping for more.

On to the Juan Daily, with lime juice, white tequila, GM, simple syrup, cilantro, and jalapeno.  Got that?  Reading that I knew it’d at least be interesting and I was spot on; it had an almost vegetable taste with a smooth burn throughout.  I liked the spicy effect of the tequila and jalapeno, a faint and nice burning sensation.  After that we went with the B&B 75 made of Hendricks, Cucumber Vodka, and sparkling wine.  It was an intriguing taste that belies its relatively simple mix — very intricate taste, spicy, with a lingering cucumber tease.  Very good.

The half was over and we moved into crunch time as the evening went on, starting with the Ginger Peach Julep.  I like ginger, I like peaches, and I like juleps, so I’d like this….eh, the combined flavor seemed “off.”  The peach was too subdued to matter, so you basically are left with a bourbon and ginger mix with a lemon kick, which is just ok.  Forgettable.  We sped it up with the Italian Greyhound, a beautiful drink that tasted hollow and a bit sour.  Not awful but just lacked character. 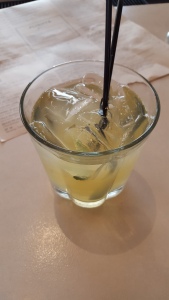 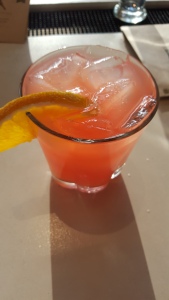 We ended with the best, the Barrelini which is a martini-glass borne-drink featuring simple strawberry puree and Old Ox beer.  I really, really enjoyed this taste, the beer taste just launches off the sweet puree for a great mouth feel and taste.  Can’t recommend strongly enough. 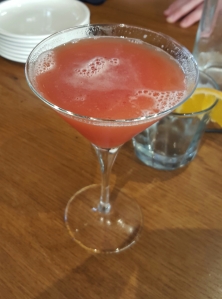 So a good time at a beautiful, sunny bar.  Give it a whirl when you’re done shopping sometime.