Quarter and Glory is a good spot for a large group looking for a fun time off of 14th Street.

Ever attuned to the openings of new DC cocktail bars, I read with interest of Quarter and Glory, a New York-sourced spot that takes its name from a farewell toast used by a members of a literary society founded by Eugene O’Neill. Now I love to mix my books with alcohol, so I headed up bustling 14th street and stopped in at my earliest opportunity. One is impressed immediately upon entry by the beautiful space, with a high ceiling adorned with chandeliers, an expansive bar, window seats, dark tables, and an open main drag lending it a welcoming air. Definitely a good destination if you have a large group. Service was prompt and friendly. 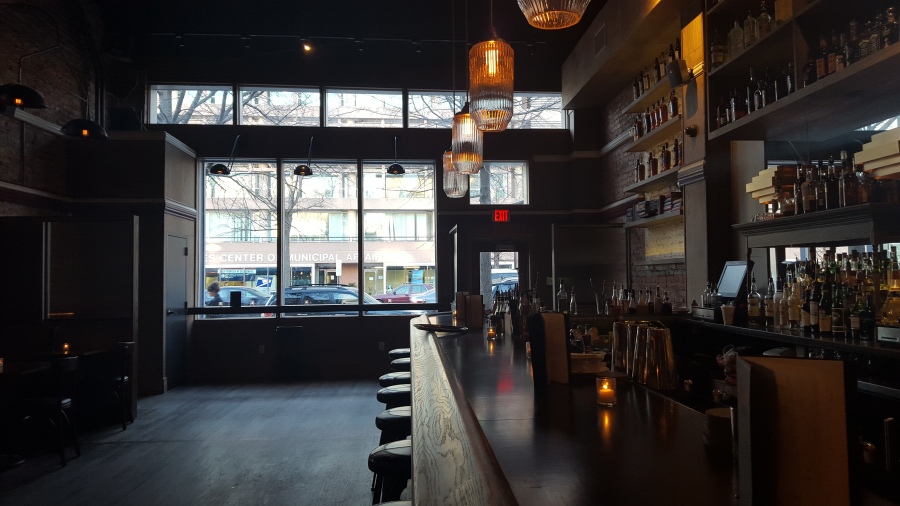 The signature cocktail list at Q+G employs an impressive range of “out-there” ingredients and unique combinations. The 11 drinks we sampled were mostly decent and included one standout. Started with the namesake drink, the “Quarter and Glory” with Brugal Anejo rum, Cutty Sark Prohibition Scotch, Gran Classico Bitters, Punt e Mes, Tamarind Vinegar, and salt. That was an intriguing and intense drink with the rum hitting early leading to a scotch-heavy burn and a peppery and ginger-ish closing. I was surprised rum and scotch played well together in this OK drink. Moved on to the “X” with Plymouth Navy Strength gin, Brennavin (a clear unsweetened schnapps from Iceland, which is awesome), Maraschino, Green Chartreuse, and lemon. This dark-hued enigma is dominated by herbal, chartreuse flavors and the maraschino, although the gin contributes faintly. However, I found its bitter after-taste a little off putting, and the drink overall didn’t click for me. 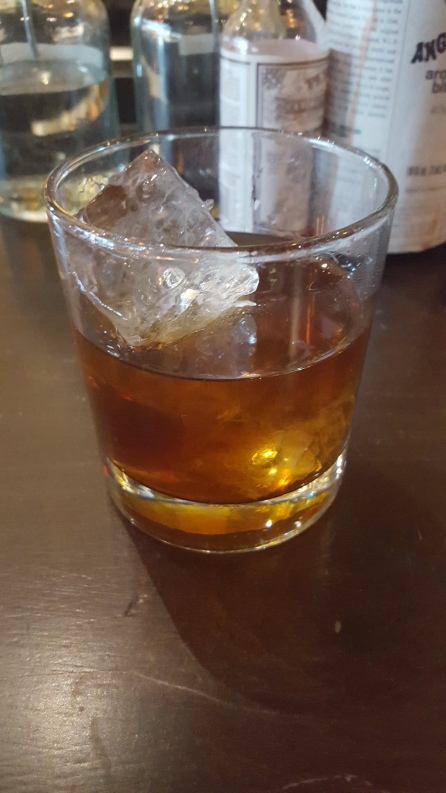 Next up was the “Bound for Buenos Aires” with Anejo rum, Giffard Banane du Bresil, lemon, spiced apple, apple cider vinegar, and angostura bitters. I love bananas and everything about them, but it was a little overwhelming here. Fine for the aficionado, but it’s very strong and up front, masking a complex and decent apple/sugar hint. Just a bit unbalanced, I thought. Then, a “Call Me” with Fords Gin, Giffard Pamplemousse rose, honey, and champagne. This was fine, nice and sprightly with the gin playing a supporting role and the honey mixing passably. However, the sensations seemed a bit out of synch to me and failed to click just right, I thought.

Next was the standout, the “Zelda” with Aylesbury Duck vodka, lemon, Giffard Peche de Vigne, honey, egg white, and sparkling water. I really took to the peche de vigne here, it lends a perfectly light and sugary touch, appropriately softened and smoothed out by the honey and egg. A very simple but effective mix, really liked this one. Moving on I ordered “DT’s” with Teeling Irish whiskey, lemon, Giffard Pamplemousse rose, Apple brandy, maraschino, and ginger ale. The drink was refreshing and I found the rose and ginger ale particularly nice touches. A strong apple brandy taste forms the core of the taste – it’s a bit of a different bite, but I thought it was enjoyable. 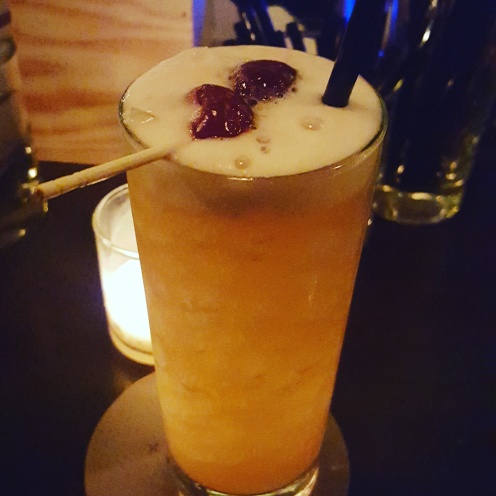 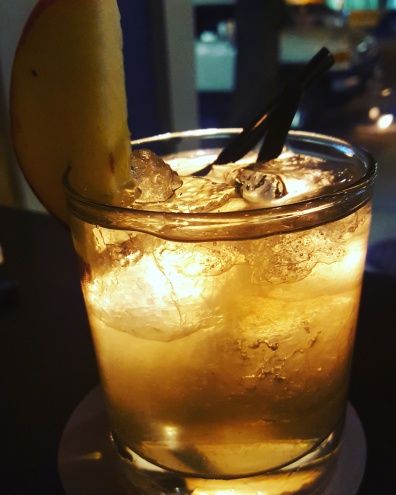 We went big with “Tyrone” with Cutty Sark Prohibition Scotch, Pedro Ximenez Sherry, Montenegro Amaro, Giffard Banane de Bresil, orange bitters, porter, egg, and nutmeg. This is a heavy and stout drink that on paper seems complex, but I thought the porter was a bit too much, its heft drowning out the sherry or amaro. The scotch plays in the background but again, this is more a showcase for the porter, which was fine. Then, the “Jamie (Here’s How)” with Rittenhouse rye, Gran Classico Bitters, Angostura, and sarsaparilla. An ok drink, I got an almost grape taste off of the sasparilla, but not much else. The rye is there but it’s sasparilla’s show.

Next up was the “The Crack-Up” with Fords gin, Antica Carpano, and Green Chartreuse. The herbal, vanilla-ish carpano taste is heavy here and doesn’t leave room for much else. I wasn’t quite sold on the pairing with the chartreuse and found it a little off-putting. Moving on, I had the “Old Blowhard” with El Buho Mezcal, Antica Carpano, Cocchi Americano, and absinthe. Mezcal doesn’t often play well with others and I can’t say I loved its pairing with the carpano and cocchi, which I don’t love under normal circumstances. This is a ball of fire and is decent, but challenging.

The last drink of the evening was the “White Whale” with Cana Brava rum, Cocchi Americano, Dolin Blanc Vermouth, and Salers Aperitif. I liked the rum and Americano, but I didn’t feel the various tastes gelled. The mouthfeel was a bit thin and stringent, and prevented me from really embracing this one.