This week I’m reviewing Spain in Our Hearts, Adam Hochschild’s history of foreign volunteers in the Spanish Civil War. Hochschild’s description of the idyllic Spanish countryside, along with DC’s customary stifling heat, got me thinking about simple cocktails that both refresh and evoke visions of olive groves and green foothills.

First up was the “Marianito” a simple three-part play of gin, Campari, and vermouth.  The cocktail is a staple of Basque country, a homage to the Spanish tradition of drinking vermouth straight and often. This was a surprising hit for me; I usually shudder at vermouth heavy drinks, but here, the herbals and bitterness from the gin and Campari complement and soften the harsh vermouth cut perfectly. A perfect slow sipper, this was wonderful.

Apparently, in Spain, sangria is for the tourists, “Tinto De Verano” is for the locals. And I could see that – Tinto is a bit hardier than your average sangria, with a more robust, grapier punch that hits hard and is only barely thinned by the soda. Now, the Spanish red I used is a bit of a heavy puncher, but this is still relaxed enough to drink on your veranda in the sunshine. It’s more…intriguing than your average sangria, and it’s worth a try at your next picnic.

Our third drink was the “Rebujito,” an easy mix of sherry and 7 Up. This drink is popular round Seville, an area known for sherry. I’ve never been a huge sherry fan but, in the Spanish spirit, I grabbed a bottle of attractive looking Don Fino from Spain and gave it a whirl. This is a nice peppy little summer drink, the rich and robust sherry stays firm despite the 7 Up but gives a little to citrus, making for a harmless warm weather sipper. Nice. 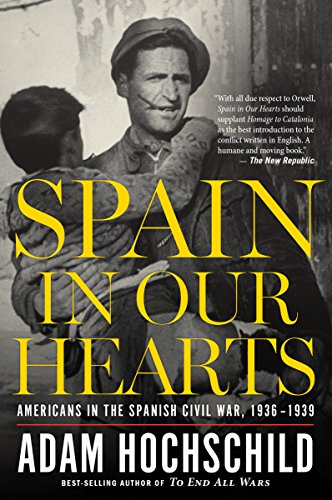 “Spain in Our Eyes” is in an enlightening but tragic history of the Spanish Civil War told threw the eyes of American and other Western volunteers who risked it all in defense of the doomed Spanish Republic. Their motivations varied – some were die-hard Marxists or anarchists, others loathed fascism, while a third contingent ought adventure and fame. Although their ranks included some celebrities – George Orwell was a member of the Trotskyite POUM movement — most of the American fighters are long forgotten. Hochschild’s book makes excellent use of personal diaries and interviews to fill in their stories, making the history more intimate.

The foreign volunteers who poured into Spain in the late 1930s were armed with zeal and little else; lacking weapons and military know-how, foreign units including the American “Abraham Lincoln Brigade” were savaged by heavily-armed fascist units backed by German-supplied armor and air power. Meanwhile, their supporters in the rear squabbled endlessly, divided by rigid and histronic interpretations of anarchism and communism. Given the endemic military and political weaknesses facing the foreign units, it is a wonder they survived as long as they did.

Perhaps the most important role of the volunteers was to energize foreign financial and political support. Sympathetic members of the New York Times and other outlets wrote hagiographies of foreign fighters and lauded their exploits, motivaiting many partisans of the left to lend materiel and morale aid to the Republic. But as Hochschild details in the most powerful segments of the book, foreign democracies including the US were unmoved by liberal calls for intervention. Eyeing the political risks of energetically supporting Spain’s Republicans, FDR demurred, delaying and avoiding any proposal to arm anti-fascist forces in the country. This cowardice laid the groundwork for future appeasement and, eventually, the Third Reich’s expansion. This international inaction and growing military disadvantages ensured the Republic’s American defenders were headed for hardship, disolusionment, and finally defeat.

Hochschild does an admirable job telling the stories of these dreamers, although those looking for a more comprehensive history of the conflict should go elsewhere (see Paul Preston’s book). The volume is well-paced and choc full of interesting factoids and asides, particularly on anarchist and leftist experiments in governance and international communism’s role in the short-lived Republican adminstiration. While entertaining and insightful, the book never quite gripped me, and I felt it gave short-shrift to some of the broader storylines and dynamics of the war and the titanic ideological struggle it heralded. Still, very much worth a read.