This week I’m reviewing Robert Gaudi’s book “African Kaiser,” a marvelous little history of German’s forgotten African colonies during World War I. I’ve dabbled a bit in Germanic cocktail-ology previously but never explored imbibing during the Wilhemine Period. Unfortunately for me and all of Europe, Kaiser Wilhelm II–the last and dumbest Kaiser–was a bit of a teetotaler (another reason not to trust non-drinking leaders, ahem). According to this great article from A History of Drinking, Willy enjoyed a smoke but kept his intake to a minimum. Unsurprisingly, the master of Imperial Germany took a decidedly nativist approach to alcohol, case in point:

“At the New York christening of the German Imperial yacht, Meteor, a Moet-Chandon supplier pulled a prank and swapped out the German bottle for one of his own. Leave it to say that Wilhelm was not amused, going as far as to recall his ambassador from the U.S.A.”

Geez, chill my dude. Although a kill joy, Wilhelm did have a bit of a dalliance with the burgeoning American cocktail phenomenon. In 1895, an American naval officer invited the Kaiser to eat with him during a port stop in Kiel. From the Boston Globe:

“The first luxury that appeared was an American cocktail, which the emperor sniffed and tossed off with joy in his eyes.

“Superb!” he exclaimed, nodding his approval at “Fighting Bob”. “A ‘kochtael’, you say? Delicious! Humph!” The dinner proceeded.”

Apparently the leader of the German empire requested a second hit, but was informed that a follow-up would break American naval etiquette (one drink per meal). Probably apocryphal, but I’ve always found history a bit more fun with some fiction mixed in.

Despite the dryness of Wilhelm, the Wilhemine era did inspire some mixology including the “Prince Henry,” which was created by the Waldorf Astoria Hotel to celebrate the visit of Wilhelm’s brother in 1902. It drinks fairly well, with a nice little mix of herbal notes and just a pinch of mint. It’s fairly strong and should be slipped slowly. Next up was “The Kaiser” which I wasn’t a huge fan of – the orange kick rides roughshod over the gin and vermouth making for a sort of sweet, off taste. Probably worth cutting the cointreau in half at least if I make this again. 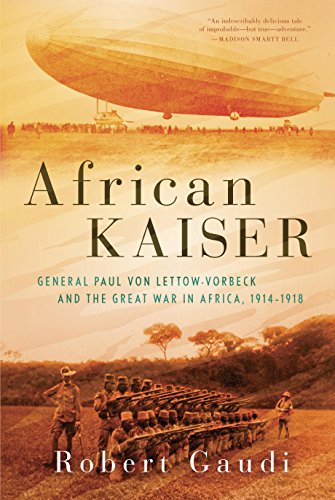 The collective memory of World War I is dominated by grey images of endless carnage and the muddy trenches that zig-zagged through Western Europe. But the war was broader than the killing fields of Europe, with far-flung battles fought across Africa and the world’s oceans, often by colonial soldiers with little awareness of events in France. One of the more interesting global battlefields was East Africa, where German forces conducted a four-year guerrilla campaign that vexed the British Empire. This desperate fight is ably described by author Robert Gaudi, who weaves a compelling tale of desperate violence in the waning days of empire.

Imperial Germany’s presence in Africa is an odd footnote in the European race for colonial territory. Indeed, Berlin was slow to embrace the gambit, having more interest in securing their interests on the continent. Still, German East Africa, founded in the 1880s, grew to encompass hundreds of thousands of square miles in modern-day Rwanda and Tanzania populated by up to 5,000 German settlers. Gaudi provides a brief and readable overview of the intriguing world of German East Africa (interestingly, the climate has kept many of old German buildings intact).

Once war broke out in 1914, German East Africa–separated from the fatherland by thousands of miles and several British fleets–was expected to recognize its hopeless position and surrender. But one man, the indomitable and clever local German commander Paul von Lettow-Vorbeck, chose resistance, hoping to turn East Africa into a drain on British resources. Von Lettow was an iconoclast – raised in the strict military discipline of Imperial Germany, he nevertheless retained a sense of tactical creativity and daring fostered by colonial-era adventure stories he read as a young man and a deployment to China during the Boxer Rebellion. A flexible guerrilla leader, Von Lettow stayed mobile, constantly retreating and striking, always one step ahead of the often ponderous Commonwealth forces.

Unlike his British pursuers, who treated their native levies little better than slaves, Von Lettow took an enlightened approach to his African troopers, a move that won him their eternal loyalty (they greeted him with open arms even decades later). Their loyalty absolute, Von Lettow utilized his highly mobile and motivated “Schutztruppe” to strike at British targets throughout the region for the entirety of the war despite being chased by far superior forces. All of this despite the appalling climate and diseases of the region, which killed many more men than bullets. Gaudi’s description of the horrific tropical diseases of the area and how they ravaged the ranks stand out in terms of their horror.

Gaudi’s accounts of the savage battles and the individuals involved are vivid and his research exhaustive, making for an engaging read. The passages are spiced liberally with flowery flourishes that come across as a a bit grandiose but strengthen the already compelling bedrock narrative. It is a little known piece of history described magnificently well, and it is a book very much worth reading.

One thought on “How to Drink Like the Kaiser”