This week I’m reviewing “The Silk Roads” by Peter Frankopan, which recasts world history as an Asian-centric story rather than the European saga we are raised with. As I write this and think of the scale and breadth of Frankopan’s book, I’m a little embarrassed that I didn’t search the ends of the Earth (or the internet) on a hunt for exotic cocktails that evoke the vivid customs and fabrics of Central Asia and the Middle East.

While perhaps not exactly exotic, the “Silk Road” is a splendid drink with a wild rush of herbal, spice, and fruit influences. The rich earthy taste hits early and lasts FOREVER, with a great but almost overwhelming rush of syrupy gin, citrus/sugar, and just a kiss of bitter. The next time I make this drink I might go lighter on the sugar and lime (although it’s only a touch) as the overall flavor was almost too resonant. But this was a memorable drink, and definitely one I’d want to show off for some friends. 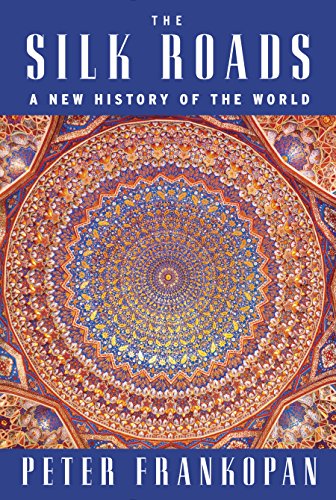 While I usually skip over the introduction in nonfiction books, I’d recommend taking the time to read the intro to Peter Frankopan’s excellent “The Silk Roads.” In it, he passionately argues that the Western view of history has been warped by our location – civilization, as we learn it, began with the Greeks, who begot the Romans, who begot us. This classical ancestry is crucial, but when overemphasized it blinds us to our roots in Central Asia and the Middle East, where storied civilizations including the Persians and Babylonians laid down the economic, legal, and religious structures that dominate our lives today.

This is the story of the world told from the center,  recounted cleanly and compellingly by Dr. Frankopan, whose writing is never weighed down by excess academic language. Instead, the reader is entertained by a barrage of rich stories told well. These stories mostly involve exchange – as goods and riches flowed thousands of miles east and west, ideas and technologies soon followed. Silks Roads describes this synergy in seemless fashion, detailing how civilizations borrowed, bought, and stole from one, a ruthless process that pushed civilizations forward. Ironically, this civilizational tumult occurred with little input from Western Europe, which was viewed as a savage hinterland of no value to the well-heeled civilizations of the Middle East and Asia.

Frankopan does a fine job detailing these sweeping cross-currents, but the joy of this book is in the small stories, the artifacts and explorers who wind up thousands of miles away from their homes in settings you’d never expect. Roman art in Chinese tombs, European explorers in the courts of the Khans, these tales spice up Frankopan’s history and illustrate how ancient civilizations were far from the independent, segregated worlds that we imagine. Globalism, it is made clear throughout the Silk Roads, was hardly a 20th century invention.

However, the Silk Roads stumbles when the narrative reaches the 1400s and the rise of the West. Frankopan’s storyline, while still well-researched and interesting, begins to read as conventional and cliche. The book would have been better served, I believe, if it simply ended as its subject civilizations began their inexorable decline. While the final quarter is lackluster, it should hardly dissuade you from picking up this marvelous and readable history.