This week I’m reviewing Bill Beverly’s “Dodgers” a crime novel that begins in the embattled slums of Los Angeles. LA’s rougher neighborhoods haven’t generated many craft cocktails (at least that I could find), so I searched for noir-ish drinks that evoke visions of LA Confidential or Chinatown. The first drink I made was “The Brown Derby” which is named after the legendary restaurant of Sunset Blvd fame and the setting for one of my favorite I Love Lucy episodes.

This classic cocktail was surprisingly good (I don’t usually love grapefruit) with a crisp, warm burn off of the bourbon livened and sweetened just enough with the citrus, leading to a warm, resonant conclusion off of the honey. An easy to love cocktail, this would be great drink to serve at a classy dinner party (or at least I think it would, I never get invited to classy dinner parties).

I’ve only visited LA once very briefly so I don’t have any experience with “Mulholland Drive” BUT I did see the amazing David Lynch film when I was in college. It was disturbing, erotic, and enigmatic, in that order. So when I found this cocktail via Station Hollywood, I was hoping for a similar reaction! This drink forced me to try something new: infuse vanilla beans and tequila. There are a few ways to do this, some of them fairly complex; but I’m a simple man with simple tastes, so I just cut open two vanilla beans (thanks Amazon!) and plopped them into the tequila bottle and let it stand for a week.

It was certainly worth the effort; the Mulholland is one of the better drinks I’ve ever made. The serene scent of the natural vanilla works perfectly here, blending with the sharp tequila sting for a smooth, perfectly earthy taste. Add a scootch of citrus and even more herbal sugar and spice from the ginger, and you have a masterpiece on your hands! Top it with seltzer and it’s a perfect veranda drink to take in the summer sun. 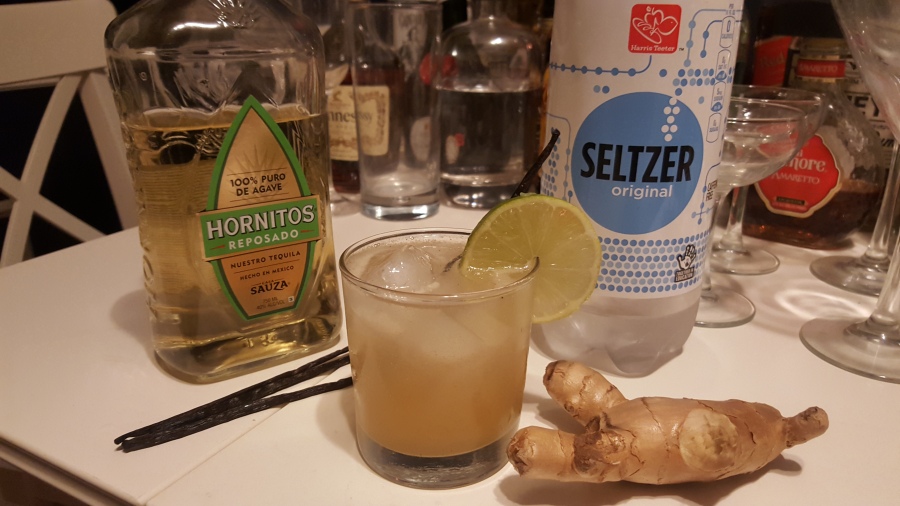 Several reviews have compared Bill Beverly and his debut novel “Dodgers” to famed crime novelist Richard Price. This comparison rang true to me, as both authors make effective use of sparse, brutalist language to convey cooly violent tales; even the cover of monochromatic roadways echoes “Samaritan.” Dodgers tells the story of East, an oddly mature and mentally sound teenaged soldier in a vicious LA gang deployed on a cross-country mission to kill a problematic judge. Raised in the “Boxes” neighborhood, East’s savage upbringing prepared him for such an endeavor, but his path is complicated by three accomplices who don’t quite share his icy discipline.

The narrative is fairly compelling, particularly in its first half as East and his young team—very much of out of place in the Mountain West—dodge the law and locals. Beverly’s “travel” writing is enjoyable, minimalist but with enough color and cynicism to bring out the harsher side of American life. Of course, young and out of their element, the crew run into all types of hurdles, culminating in a searing, tense showdown that is especially well-written. The blood flows and the drama is high.

And then….the book sort of dies. The expose of East, his life, and his development on the road is at the heart of the story, but as it lurches forward, the tension evaporated. I thought the plot derailed and became forced, plodding. The ending sparks a little, adding some fire, but I ended Dodgers underwhelmed. Still, all in all, an exceedingly well-written book good for a lazy summer day.

"Any one therefore who is heavy laden, or who wants land to cultivate, may repair thither and abound, as in the Land of promise, with milk and honey: the ways are preparing, and the roads will be made easy, thro' the channels of Potomac and James river.” Pleasing and warm evening @adasontheriver and the "Life on the Water" with tequila, raspberries, agave nectar, and lime.
“Every time I close my eyes blowing that trumpet of mine, I look right into the heart of good old New Orleans. It has given me something to live for.” Enjoying the lively atmosphere and stellar cocktail list @dauphinesdc, including the tried and true "Hurricane" with rums, oj, passion fruit, and Fassionola syrup.
"Two lovely berries moulded on one stem." Paid my first visit to the beautiful @ruthiesallday and was really wow'ed by the menu, including the "It's Berry Nice!" with bourbon, blueberry jam, salt, and lemon.
"There is nothing I would not do for those who are really my friends. I have no notion of loving people by halves, it is not my nature." Getting back in the brunch game @ninamay_dc with the "That's My Jam" with Grappa, apricot preserves, basil, and lemon.
"Veil after veil of thin dusky gauze is lifted, and by degrees the forms and colours of things are restored to them, and we watch the dawn remaking the world in its antique pattern." Last weekend was like a dream, shaking the cobwebs off and getting reaquainted with social daydrinking. Enjoying the view @barca_alx with a "Pomelo Sangria" with
"We live in the midst of alarms; anxiety beclouds the future; we expect some new disaster with each newspaper we read." First time out for cocktails in over a year....man, I've missed it :) A wonderful reunion @captaingregorys with "Gregory's Grog" with rum, honey, pernod, cinnamon, lemon, grapefruit, and angostura.