The summer sun has brought out the city boy in me, prompting me on most Saturdays to toss on a pair of flip flops and traipse down the 14th street corridor on the hunt for cocktails and distraction. There a lot of options – with 2 Birds 1 Stone, Tico, the Gibson, Provision 14, Archipelago, Quarter and Glory, and a host of others – after hitting a few of those places it’s hard to make it down the street with a straight stride!

One option I’ve passed by several times is Kapnos, the Mike Isabella-run Greek restaurant. In November, I drank heavily at Kapnos Taverna in Arlington and wasn’t blown away, but the DC flagship’s nomination for the Rammy’s best cocktail program piqued my interest. So, at the end of a few of those long strolls, I popped in for a few lazy summer sipping sessions. The bar area is sleek and modern, with a long bartop and some spacious out tables. It’s a comfortable spot to lounge, drink, and look out onto the hustle and bustle of 14th street.

As for drinks, Kapnos’ list is a trip – the cocktails all have their own distinct identities and carry some real ooomph; not many “light” sippers here, so, if you’re human like me, you may have to schedule a few trips to get through the whole list! There’s some pretty sophisticated cocktail artistry in Kapnos’ drink arsenal – ingredients you don’t normally see paired, some unique and experimental tastes, and lots of risk taking, which I like. Of the 11 cocktails ordered, I thought six were standouts, a very impressive ratio! 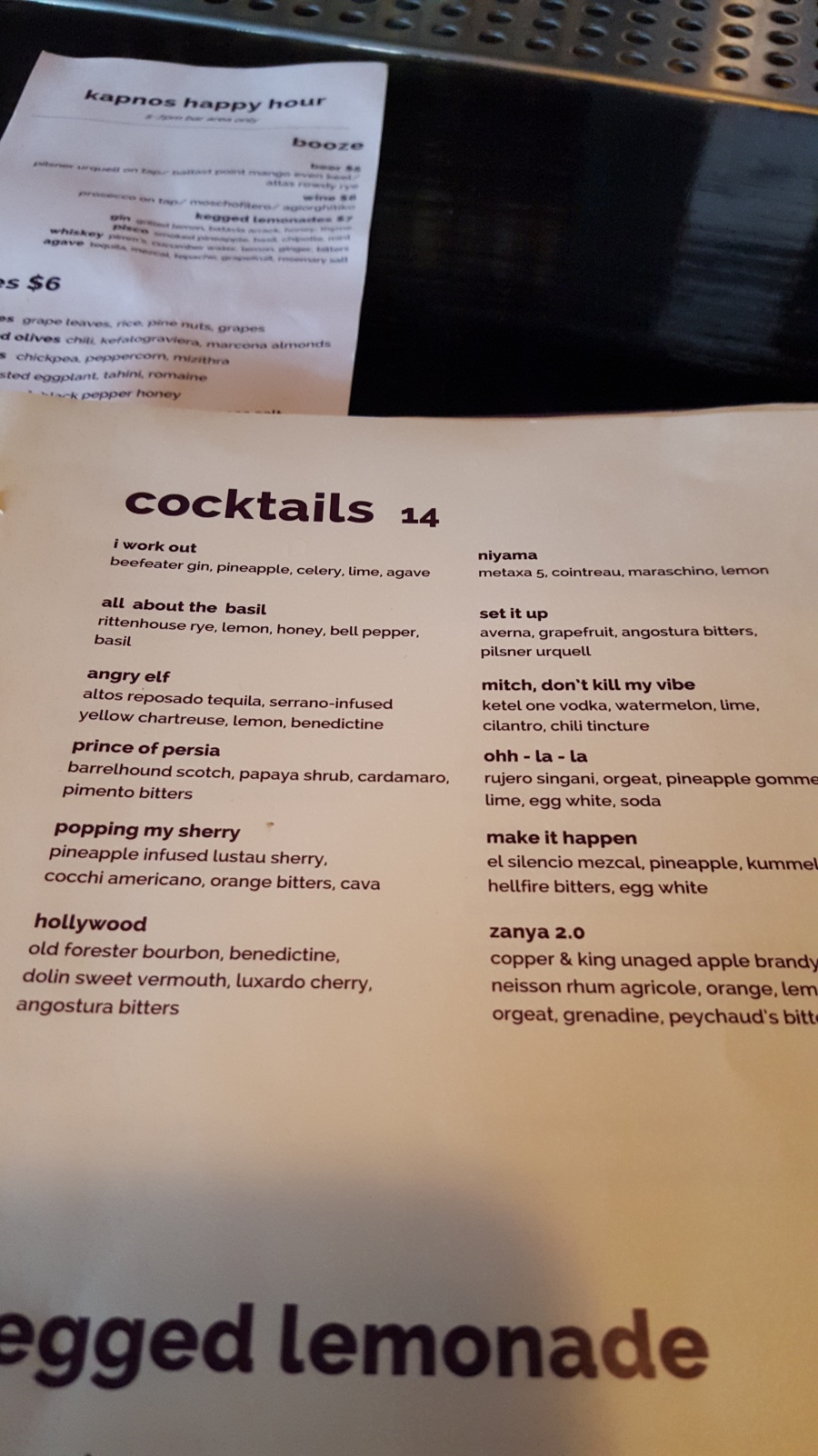 Party started with with two standouts, the “I Work Out” with Beefeater gin, pineapple, celery, lime, and agave. As fresh as fresh can be, this drink is well-measured with the pineapple, gin herb, and agave tinges energizing the taste buds as it goes down. A great and surprisingly complex summer drink made for the veranda. And the celery lends this green edge to the whole affair. Lovely. Then the “Ohh-La-La” with Rujero Singani, pineapple gomme, lime, egg white, and soda. That’s just superb, a soft and subtle sweetness from the Singani, and a orgeat and lime give it a nice, not-too-tropical grounded fruitiness. Soda pops the whole thing up, another winner for the summer. 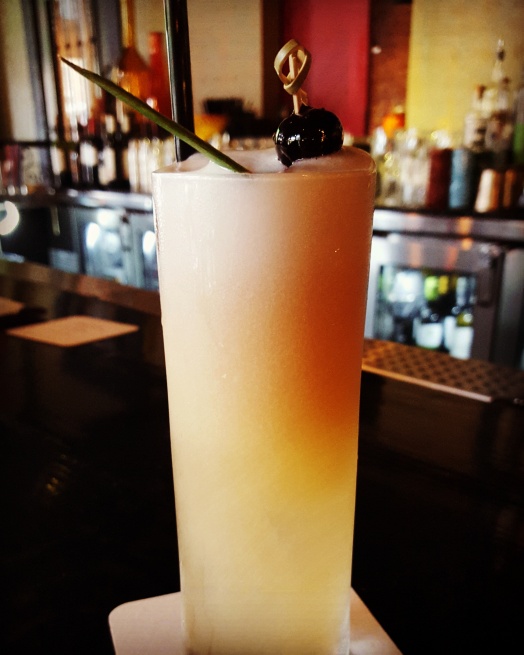 The standout streak kept going with the “Mitch, Don’t Kill My Vibe” with vodka, watermelon, lime, cilantro, and chili tincture. See, those are combos that excite you, watermelon and chili! Another killer, the watermelon – which I’ve always found a tough cocktail ingredient – works here in the background, sedate. The clincher is the cilantro and chili, which jumps in at the end and lends this great spice heat. Then the “All About the Basil” with rye, lemon, honey, bell pepper, and basil. I’m a basil head so I expected a lot from this one – it’s decent, solid, rye is a little too strong. Sort of a natural combination with the pepper and basil, gives it a little hot herbal kick. Basil rounds out the aftertaste, good stuff. 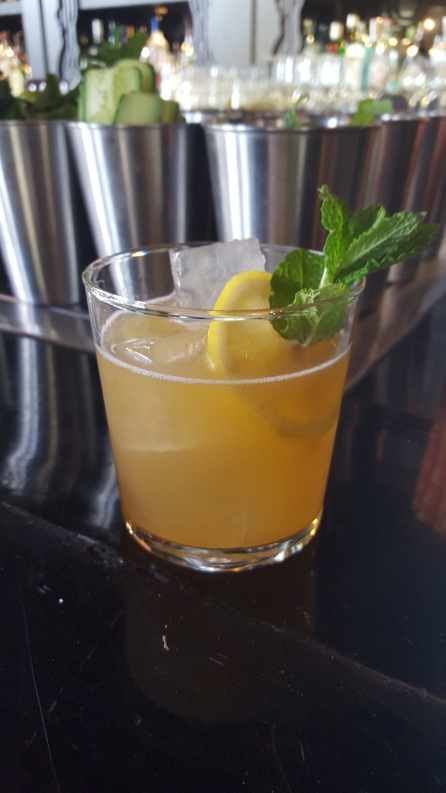 Another standout was next, the “Set It Up” with Averna, grapefruit, angostura bitters, and pilsner urquell. This standout was excellent, equal weight light and airy grapefruit and then a heady, rich weight from the pilsner. Just a nice resonant hitter with a real refreshing glint. Then the colorful “Zanya 2.0” with apple brandy, rhum agricole, orange, lemon, orgeat, grenadine, and Peychaud’s bitters. Look at that pretty drink! The taste ain’t so bad either, with a chill combo of sugary brandy, some sweet citrus, and then a more earthy but subtly sweet hit off of the orgeat. Nice.

Then the “Hollywood” with Old Forester bourbon, benedictine, Dolin sweet vermouth, luxardo cherry, and angostura bitters. I knew this was going to be a challenge with the maraschino and benedictine and….it was. Very harsh and powerful, you go through some a real resonant booze kicks, unforgiving and bitter. The bourbon and vermouth is a rich and raw combination, sip it slow and try to enjoy the ride. Interesting. Then a standout, the “Niyama” with Metaxa 5 brandy, cointreau, maraschino, and lemon.I was surprised how much I liked this even with the maraschino – it’s there, but on the edges and gives way to a wonderfully sweet and pleasant second-half taste. The salted rim plays a fun role, adding a real spark and grit to the taste. Good, cool, and even, liked it. 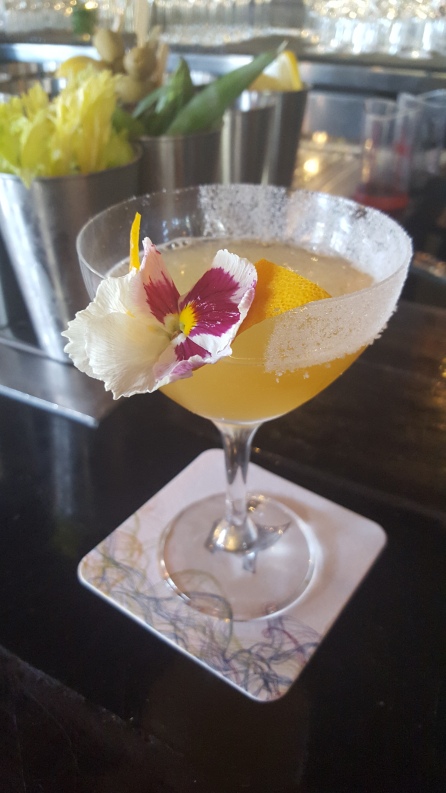 Moving on, I had the “Prince of Persia” with scotch, papaya shrub, cardamaro, and pimento bitters. Very consistent, powerful, the scotch sting is fairly subdued but still potent. I really enjoyed the full-body papaya, nice taste. The bitters and the cardamaro are in the background. OK. Then the “Put Me in Coach” with pineapple-infused Lustau sherry, Cocchi Americano, orange bitters, and cava. A very unique flavor, the pineapple sherry sparks up front and hard, but that damn cocchi – never liked the stuff, and its echo drags this drink down. Didn’t love this one. 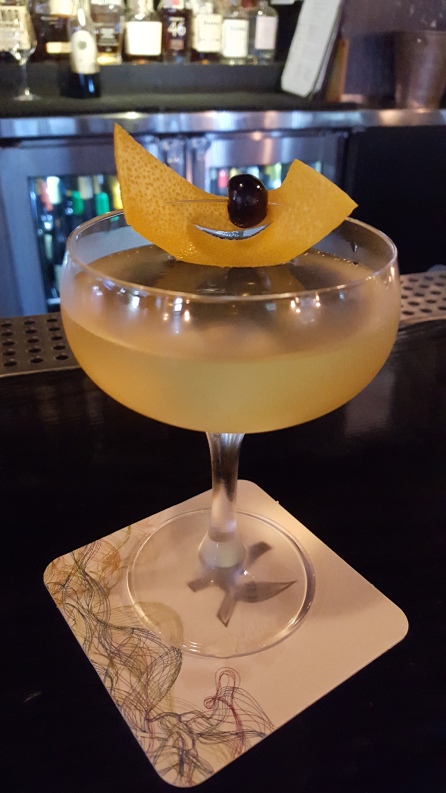 My final drink was a standout, the “Angry Elf” with Altos Reposado Tequila, serrano-infused yellow chartreuse, lemon, and benedictine. I was biased against this one because of the benedictine, which I don’t love – it definitely has a stringent, different burn. Heavy herbal influence from the chartreuse and a light tequila sting, this one carries some refreshment but I still struggled with it. Anyway, give it a whirl, see what you think. Til next time Kapnos!