Pairing a large space with some kitsch decorations, Archipelago is a fun spot for hanging with friends and sipping sugar.

Tiki is definitely “in” this year with popups sprouting up all across DC. With tiki fever at a high pitch, it wouldn’t be long before DC got its own palm frond-laden bar in the form of Archipelago, conveniently ensconced off of young and hungry U Street. Of course, when it comes to tiki, my heart will always belong to Chicago’s Lost Lake, which gave me one of my all-time bar experiences. Archipelago is going more for the open party type of tiki vice Lost Lake’s intimate, 1950s Miami backroom vibe, but that’s fine by me; the main room is perfect for large groups – I visited with an unwieldy number of people, but the spacious front room and well-placed tables allowed us to drink heavily and comfortably. There is also a nice patio and a second floor in case things get too crowded – this will be a great place for summer drinking. I wanted to make a special shout out to our waitress, who somehow managed to handle about 30 drink orders and a crowd of people expertly. Really superb service. 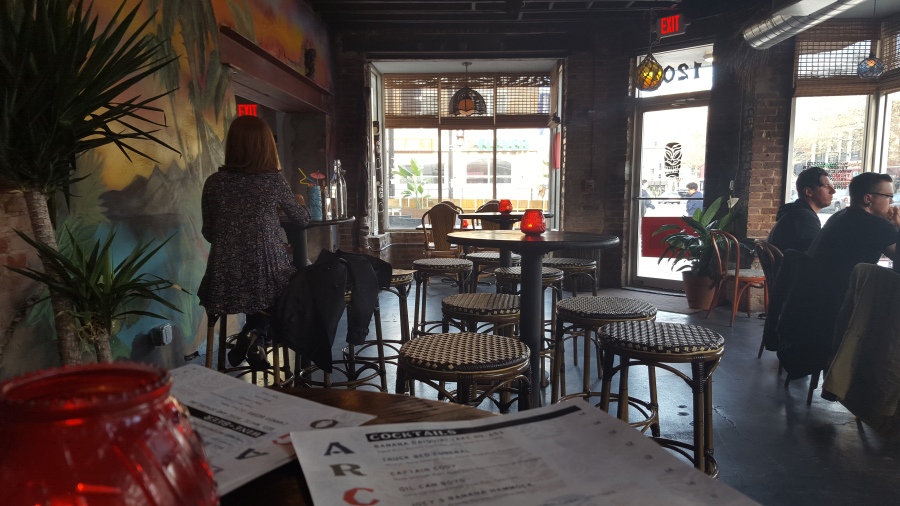 Drinks drinks drinks – I undertook a thorough survey of Archipelago’s long and fun menu, trying ten of the cocktails including one standout. Overall, I thought the list was good with some interesting and daring flavors and a preference for strong, rum forward tastes – people who mistake “tiki” for “fruity/light” are in for a wakeup call here. Of course, the garnishes are out of this world and very creative – do yourself a favor and mosey on over to the bar to see the accumulated garnish arsenal, which resembles a mad scientist’s medicine cabinet.

I started with the “Banana Daiquiri Take No. 653” with aged rum, banana, black strap bitters, and lemon. This was a very pleasant daiquiri with a thick, heavy banana presence including real banana chunks. A light alcohol touch with just a hint of rum, and nicely sweetened by lime that plays well throughout the drink. A solid daiquiri with a beautiful banana dolphin for you to post Instagram pictures of (I’m guilty). Next up was the ornate “Captain Cody” with Navy strength rum, coconut, orange, and pineapple. This was strong and rum/pineapple forward (pineapple is the lead ingredient in a lot of Archipelago’s drinks), with a great tropical taste as the drink moves on. I also liked the coconut hint along the spine of the drink that lends a cooling, herbal sensation. Good drink. 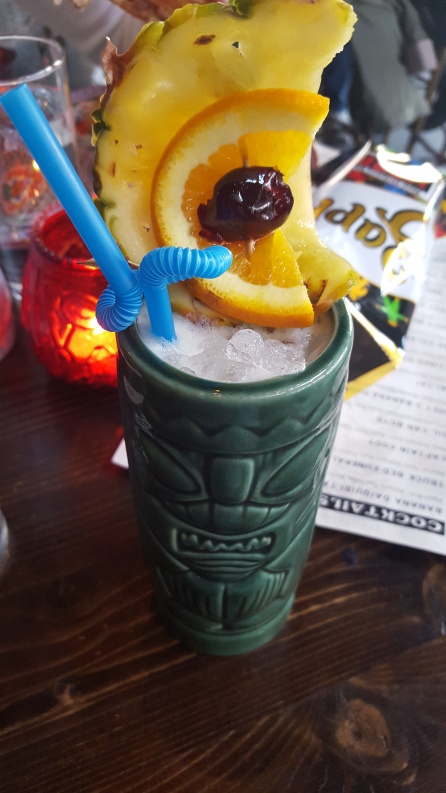 I then went with “Joey’s Banana Hammock” with Silver Rum, brandy, banana, and almond milk. This drink was a little underwhelming which surprised me, given how much I love all these ingredients. The taste was fine with a nice rum and banana burn, but I didn’t get much from the almond milk or brandy. Not bad. I went a little more conventional with the “Mai Tai” with aged rum, rhum agricole, cointreau, lime, and orgeat. Hot damn this was probably one of the most potent mai tai’s I’ve ever had, a veritable sugar-laced shot gun blast, ultra-rum forward and with a strong hit of orange liquor. Solid and rich, the orgeat stiffens the whole flavor and gives it a palpable thickness – those used to guzzling mai tai’s outside might want to slow down the intake with this one. Nice.

For a bit of a pick me-up I then got the “Slip and Fall” with Jamaican rum, aged rum, lemon, all-spice, and coffee. The drink was a bit rough at first with a very interesting, spicy and sweet mix that struck me as a bit off at first, but the taste evens out as you go on and the coffee is introduced, making for a surprisingly earthy, caffeinated cocktail. The lemon, which I was worried would add an odd stringency to the organic bean taste, is subdued and offers just a lick of tartness. Very good “end of the evening” drink I thought, as long as the you don’t plan to sleep after. And really, who has the time? Next up was the “Lonely Mermaid” with Navy-strength rum, aged rum, lemon, and buttered pineapple syrup. The mermaid has a very unique, rum-forward taste that is then powered through by a really intriguing, pungent pineapple syrup. The second half of the drink is a pineapple show, so I slowly sipped this one, mulling that wild sugary citrus circus. Good, and worth getting for the pineapple syrup experience alone. 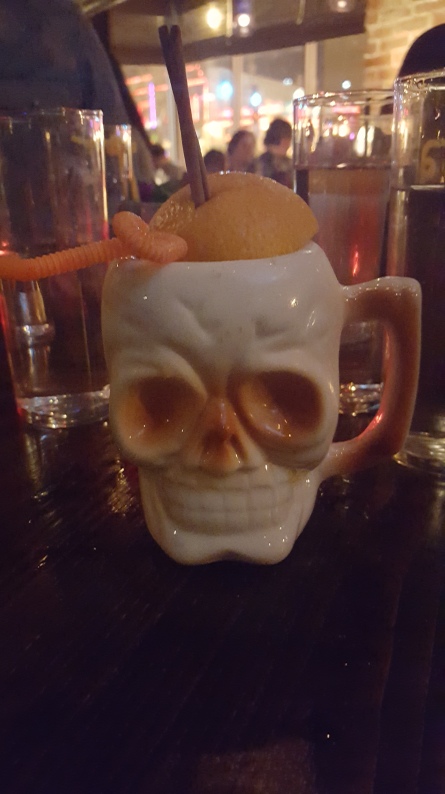 Next was the “Drowsy Gator” with Demerara rum, white rum, grapefruit, and cinnamon syrup. A very even drink, icy and neutral up front with a second half dominated by the cinnamon syrup. I wasn’t in love with that flavor but it was an adventurous, new herbal sensation that is worth trying. Moved on to my favorite drink at Archipelago, the standout “If the Phone Don’t Ring, It’s Me” with bourbon, passion fruit syrup, aperol, and lime. An awesome flavor off of the passion fruit syrup, this taste blew my socks off. There is a great orange-ish sensation from that fruit syrup that I hadn’t had before, while the bourbon and aperol play decidedly subtle supporting roles. What a great citrus taste, loved this one. 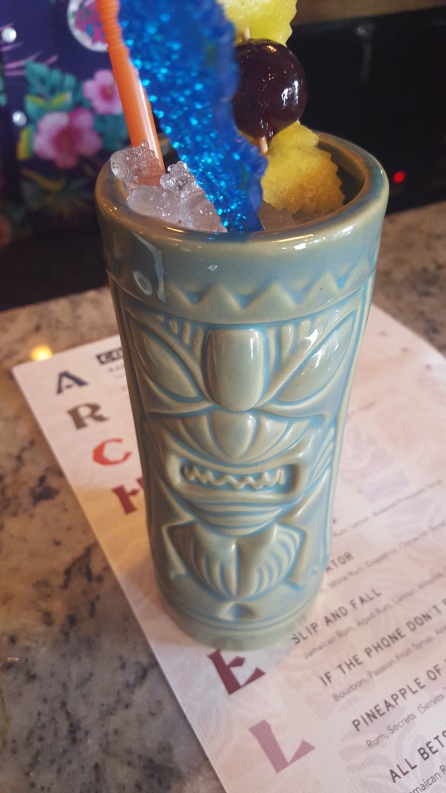 We ended our experience with an oil can and a pinwheel. The “Oil Can Boyd” with olive-oil infused black strap rum (!) and falernum. This was a ballsy mix for a tiki bar, with a fiery pungent rum burn with a subtle, soft olive herbal sensation on the borders. The falernum gets stronger as you drink on but is sort of washed away by that distinctive rum taste. Didn’t hit the mark with me but I admired the game. Our finale was the “Retired Stripper” with tequila, rhum agricole, melon cordial, and lime. This was a fireball with a harsh tequila cut across the front end. Not bad but extremely potent, although it smoothes a bit as you go on, and sweet cordial and lime pop well at the end. A drink I liked as it went on, this will be a big hit for true tequila fans. A spicy way to end a fun tropical adventure at Archipelago! 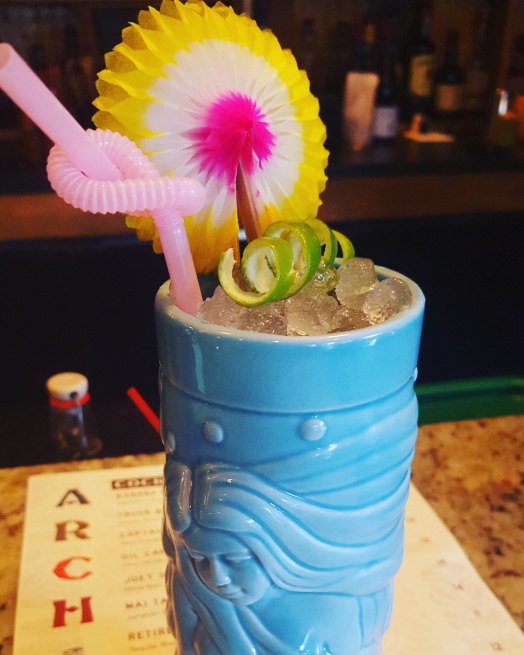 2 thoughts on “Across the Southern Seas – Archipelago”

"Life is a combination of magic and pasta." Had a wonderful dinner @carusosgrocery - brought back sumptuous memories of homemade Italian dinners back in NJ/NY. Speaking of NY, here's the "Mulberry St. Cosmo" with citron, orangecello, cranberry-infused aperol, and lime.
"Love, which pardons no beloved from loving,
"The world is a looking glass, and gives back to every man the reflection of his own face." Finally made it to the lovely @silverlyan - electric aesthetic, killer service, and just superb drinks. This beauty is the "Project Apollo" with @hendricksgin, ironwart, sour pineapple, and raspberry.
"It is a time when one is filled with vague longings; when one dreams of flight to peaceful islands in the remote solitudes of the sea, or folds his hands and says, What is the use of struggling, and toiling and worrying any more? let us give it all up." Admiring the beautiful decor at the new @lyledc and the "Apricot Sour" with vodka, apricot, lemon, and blood orange.
"And when we go back to the sea - whether it is to sail or to watch it - we are going back from whence we came." Dreaming of hazy southern seas @imperfectodc while drinking the "Tiki Taka" with cardamom infused rum, @thrashersrum, apricot liqueur, pineapple juice, orange, allspice syrup, and lemon.
"Neighbors bring food with death and flowers with sickness and little things in between." Welcoming @oldhatbar to the neighborhood and enjoying the splendid "Bets You Can't Win" with @lairdsapplejack, pineapple and jamaican rum, velvet falernum, dry curacao, lime, grenadine, passionfruit puree, and absinthe wash.