This week I’m reviewing Cormac McCarthy’s 1979 novel “Suttree,” set in 1950s Nashville. So, recently I have been on the hunt for spirits from the Volunteer State, and came upon George Dickel Tennessee Whisky, Number 8. It’s hard to get more Tennessee than the “whisky” and its namesake George Dickel – a German immigrant, Dickel moved to Nashville in 1844. After the Civil War, George, by then a prominent liquor wholesaler, started selling whiskey in Cascade Hollow, where the beautiful and rustic distillery is still based. Now, come to mention “whisky” – George felt his product was just as good as the best Scotch whiskies, so he favored the Scottish tradition of dropping the “e.” I’ve always wanted to walk Tennessee’s whiskey trail, and seeing pictures of the stately Cascade Hollow Distillery makes it an even more attractive prospect. 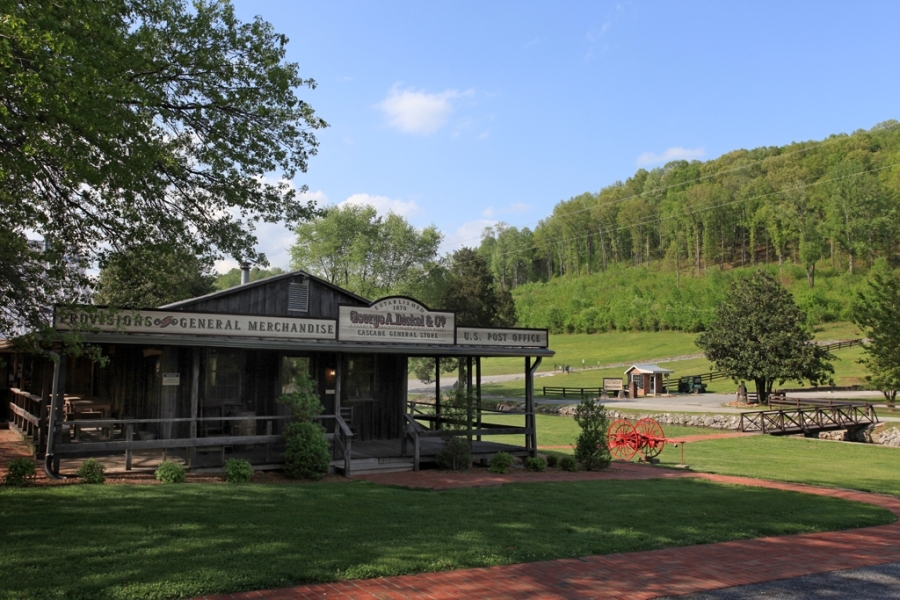 So I put Mr. Dickel to work with four drinks, starting with two simple mixes, the “Ginger George” with Dickel and ginger ale, and the “Dickel 8 and 7” with Dickel and 7 Up. These were fine, nice exhibitions of Dickel’s peppery, ultra-smooth flavor. I liked the Ginger George better – I thought the hit of soft ginger on top of the slightly sweet mash taste was really wonderful, and makes for a perfect summertime sipper. Next time I’ll squeeze a lemon or maybe muddle some mint in this sucker, I think it would work well. The 8 and 7 was nothing special. 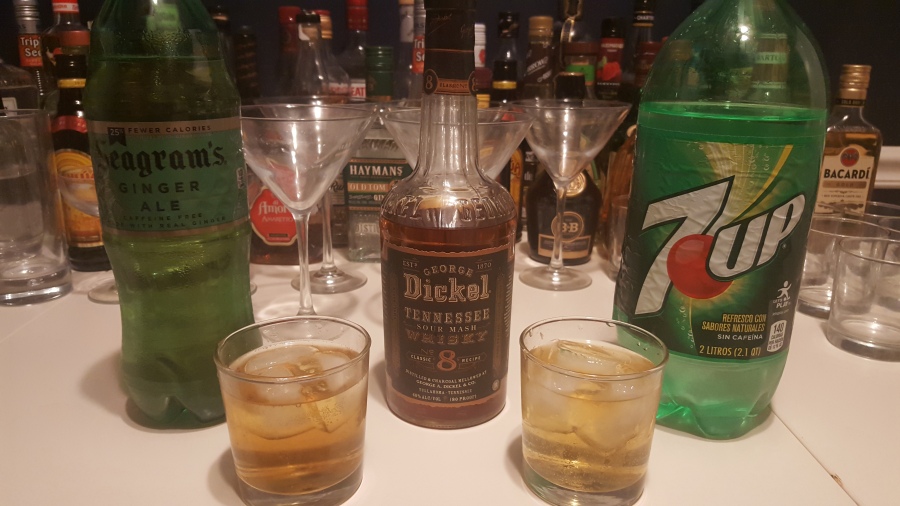 We started to get a bit more complex with the “Tennessee Valentine” with Dickel, rose, creme de cacao, and lemon bitters. Honestly, I didn’t really like this one, the Dickel and rose was an interesting taste up front, mellow and slightly peppery, but when the creme de cacao kicks it, the overall taste goes a little off the rails with a strange, almost peanut butter tint. Odd – not the way you want to describe a cocktail 🙂 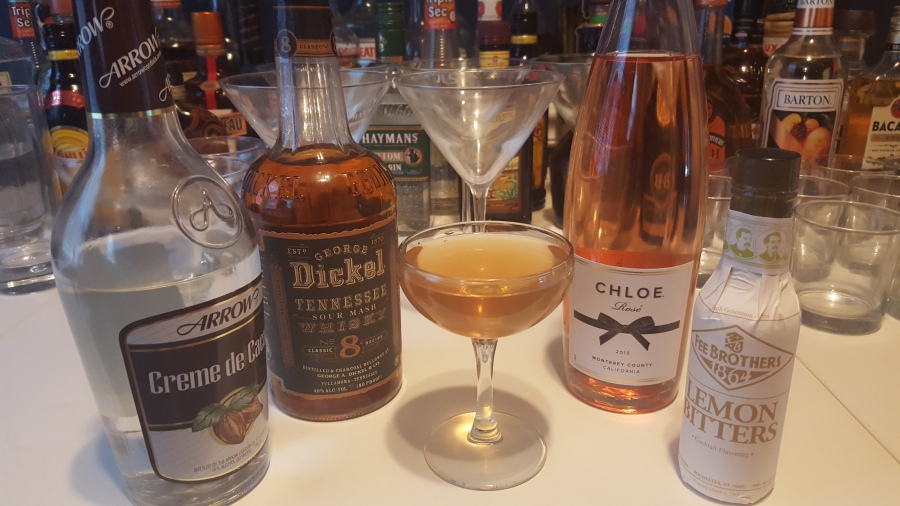 The last drink of the our Tennessee tour was the “Tennessee Cobbler” with Dickel, lemon juice, grapefruit juice, and almond extract (!). This didn’t work that well but it had some really interesting flavors that, I think in different proportions, might come out better. The almond extract was a little too strong but had a fascinating taste, so I might cut that down to 1 ounce if I try this again. The whisky is sort of washed out in the citrus and strong almond hit, so I might cut the grapefruit in half and plus up the lemon. I don’t know, something to play around with – I felt like there’s a good drink in here somewhere, but not sure it comes through in this recipe. 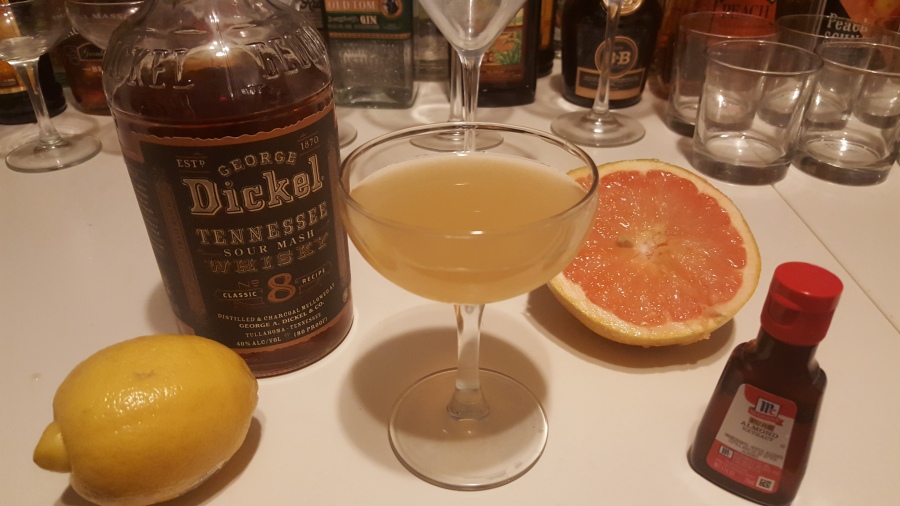 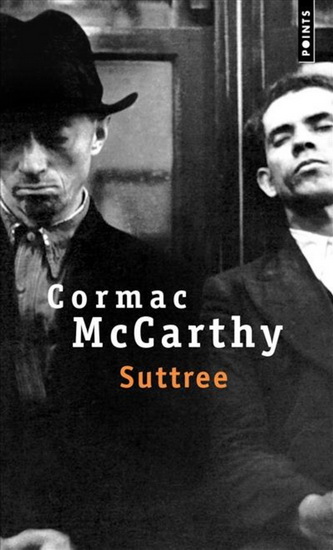 I read my first Cormac McCarthy novel in 2006 – “Blood Meridian” became my favorite novel, and I’ve read it three times since. As a testament to the power of his narratives, I can always remember where I read McCarthy novels – I read “The Road” in a Vermont cabin, “The Orchard Keeper” at Bayou Bakery in Arlington, and most of “Suttree” in a dark bar. That’s fitting – Suttree is one of McCarthy’s longest, grittiest, and unforgiving novels. The title character spends the majority of the story in the close company of wastrels, convicts, and the dregs of the waterfront, his narrative a compelling, crass series of missteps. Set in 1950s Nashville and its slimiest environs, the story of a flailing man and his broken friends jumps from time and place quite a lot, but I never felt overly challenged to follow. Instead, the shifts in the narrative make for a brutal recounting of life’s many missteps and a retrograde culture that can amplifies their consequences.

McCarthy is a legend in my eyes because his prose is so readable and vivid – you feel like you are sitting in that horrid dive bar in Nashville populated by escaped convicts and weary prostitutes. Perhaps prompted by a cocktail or two, I felt obligated to read some of the passages aloud, they were so well-crafted. Hundreds of little stories and observations of mid-century Southern life are woven together in compelling fashion; a chapter about the death of someone close to Suttree might be the most powerful 20-30 pages I’ve read in recent memory. As many commentators have observed, Suttree is also one of the funniest McCarthy novels, with enough rye humor and sarcastic takedowns to keep a smirk on ones face throughout. While Suttree might not be the easiest introduction to McCarthy (I’d recommend “The Road” or “No Country for Old Men” if you want to get started) it’s one of the more sweeping and enjoyable entries in his legendary corpus.

“I am for those who believe in loose delights, I share the midnight orgies of young men, I dance with the dancers and drink with the drinkers.” Enjoying the beautiful snifters from @thehourshop and drinking the "Alabazam, Virginia" with @catoctincreek Virginia brandy, cointreau, lemon, simple syrup, and angostura bitters.
“Hope smiles from the threshold of the year to come, whispering 'it will be happier'...” A "Martini" with @thekyotodistillery Ki No Bi gin, @maisonnoillyprat, and a twist. Have a happy New Year's everyone - I'd need about 1000 of these to drink away the awfulness of 2020, so let's just have this one and hope for a better 2021.
"It was the best of times, it was the worst of times." So happy to see this season arrive and this year go! No better way to ring it in than with a bunch o' punch, the "Pear Thee Well" with @haymansgin Old Tom, @catoctincreek 1757 Brandy, spiced pear purée (cinnamon/brown sugar/cognac/cloves), Ca Dei Zago prosecco, lemon, and ginger simple syrup.
"Trees scream and drop bright leaves." Dreaming of New England color and doing my best to embrace the fall spirit with a "Hudson Valley Cooler" with @snd_spirits rye, apple cider, maple syrup, and lemon.
"It may seem contradictory, but in the languid tropics one spends more time contemplating those great good things of sound and sight and smell." Bananas got me in a tiki mood, so I made a "Crazed Banana" with rum, banana syrup, macadamia orgeat, lime, and tiki bitters, and a "Dirty Habit Daiquiri" with rum, banana syrup, oj, simple, and angostura bitters. #dramhound
"Not drunk in any positive sense but just enough to be careless." Trying to ride out this heat wave with some Daiquiri variants including the "Original," the "Hemingway," and the "El Floridita." #dramhound