The quintessential neighborhood bar, the Pub and the People brings some aggressive, spicy cocktails and good vibes.

My face buried in a scarf in a desperate attempt to escape the cold, I was happy to spy the Pub and the People, a brick-walled, down-to-Earth establishment in DC’s pretty Bloomingdale neighborhood. My eyes were immediately drawn to the awesome bookshelves behind the bar that held a mixed assortment of volumes and booze, giving me all sorts of decoration ideas for my apartment. Service was very good and friendly – I was especially impressed by the servers who kept the drinks coming even when a 30 person bar crawl stormed into the place. Impressive service under fire! 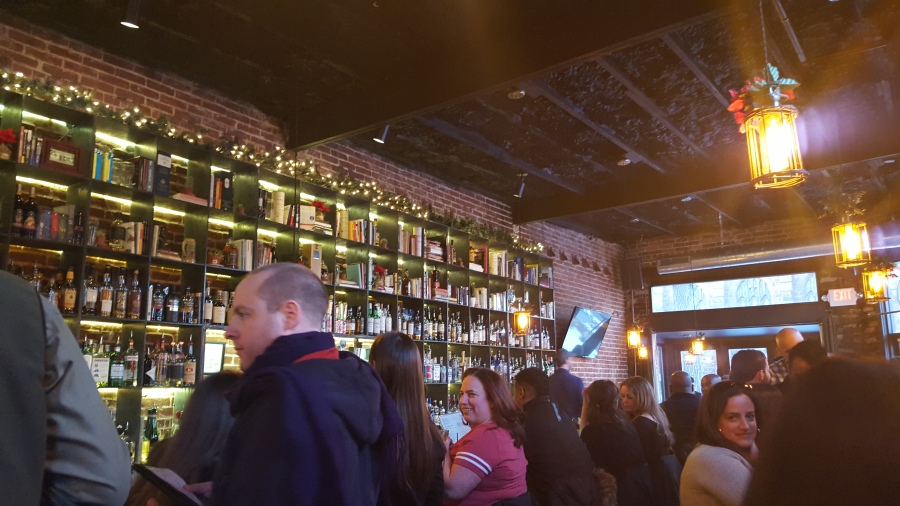 Alright, on to the cocktails. True to their plebeian name, Pub and the People has a nice line-up of straightforward, workmanlike cocktails that I enjoyed, including two standouts. They also make particularly effective use of hot ingredients, which is something daring that you don’t normally see at neighborhood bars. We started the tour with the “Rouge and Rosemary” with rosemary-infused vodka, grapefruit, honey, lemon, and Dash sea salt. This was fine with a grapefruit-dominated sweetness that came off a bit too strong. I liked how the honey and lemon played, however, and rosemary influence at the end was a nice, light touch. Things got a bit spiced up with the standout “Reposado Old Fashioned” with Peligroso Reposado Tequila, Grand Marnier, St. Elizabeth’s Allspice Dram, honey, and Angostura Bitters. This was an excellent, extremely well-balanced drink that uses the all-spice favor to even out the tequila and rye burns. The honey and orange also combine well, making for a surprisingly light but powerful drink.

We stayed on the heat train with the “All-Thai’d Up” with thyme-infused Green Hat Gin, sriracha, pineapple, honey, and lime. This standout was good heat, with the pineapple and sriracha blending for a simmering but pleasant burn. Also a subtle citrus taste that I enjoyed that gives way to a nice kick. More fire with the “El Amor Prohibido” with Del Maguey Vida Mezcal, passionfruit puree, fresno pepper, ginger, and mint. This was pure fire with the mezcal and pepper really burning over the other ingredients. For mezcal fans only, I think, as this is a showcase of that special heat that only that liquor can bring. You were warned.

Eager to put the fire out for a bit, I had the “Honey Gin Fizz” with Ivy City Gin, honey, lemon, and egg white. This was very straight forward and easy, frothy, very lemony. The gin was so subtle that I didn’t really taste it, just a very soft drink. Fine. The fire was back in force with the next drink, the “A Page on Avery” with Dickel whiskey, pineapple, lemon, honey, Blackwell rum, and Tabasco jalapeno. This was raging heat with the Tabasco taking over and the pineapple and rye playing a decidedly remote supporting role. For spice lovers only. 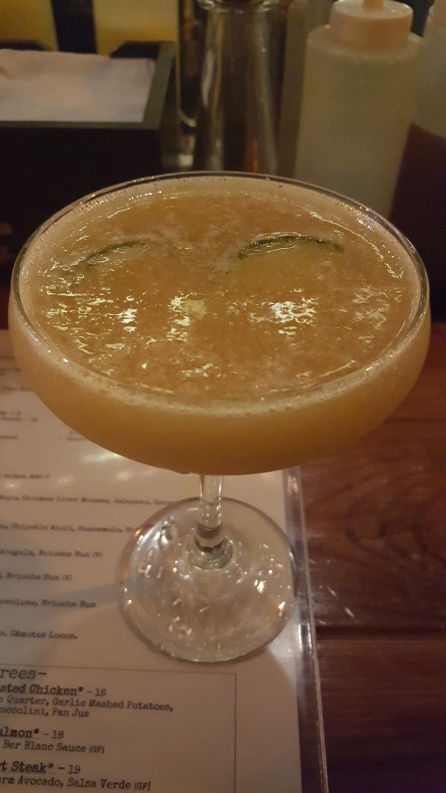 As a strawberry fan, I was pumped for the next drink, the “Strawberry Shrub” with Overholt rye, strawberry preserves, champagne vinegar, and Viex Carre absinthe rinse. This didn’t knock it out of the park but I did like the intriguing flavor that comes the preserves sparking off of the rye. Definitely worth trying, as I haven’t had anything else like it. The “Anglo-Saxon” was next with Mellow Corn Kentucky whiskey, Angostura amaro and bitters, simple syrup, and orange bitters. This was a very nice and light drink that celebrates the whiskey with a nice spike of sugar and some bitterness from the Amaro. I liked it, it was almost like a lightweight, sun-kissed Old Fashioned.

Speaking of Old Fashioneds, I finished the trip with the Pub’s In-House Barrel-Aged Cocktail which was an Old Fashioned mix. This was nice, peppery on the front end but lighter, forgiving as  you sip. A good nightcap drink, I liked it. ‘Til next time Pub and the People!