Even though I try to pass myself off as a worldly sophisticate, I have to be upfront and say I don’t know much about Indian cuisine.  Spying the opening of the new Indian restaurant American Tandoor in Tysons, it got me thinking about whether there was an Indian cocktail scene.  After a little Google search, I found a very helpful article on Kitchn that walks through three interesting Indian cocktails as developed by Floyd Cardoz.  So, always looking for adventure and new recipes, I gave two of them a whirl:

The “Tamarind Martini” consists of tequila, triple sec, lime, orange juice, simple syrup, and tamarind paste — the last ingredient was a bit hard to get, but I was able to get it through this website called Amazon that you may have heard of it.  I was worried I used too much of the paste because the hue was a little darker than that pictured in the article, but this was really good with a smooth taste that hints at the exotic hint particularly at the back end.  A spicy kiss at the end of a great, sweet, citrus heavy margarita.

I then whipped up a “Kachumber Cooler” with cucumber, cilantro, green finger chili, gin, lime, and simple syrup.  Now, I made an unforced error on this one because I didn’t read the directions carefully — after muddling, I left all the ingredients in for the shake.  This is a bad idea unless you are a fan of drinking molten lava — HOOOOOT.  And basically undrinkable.  The second try was ten times better, an awesome mix of some light spice, heat, and the natural coolness of a cucumber and gin drink.  I actually thought this would be a good mix to make for a party as it’s not overly complex but interesting enough to get people thinking. 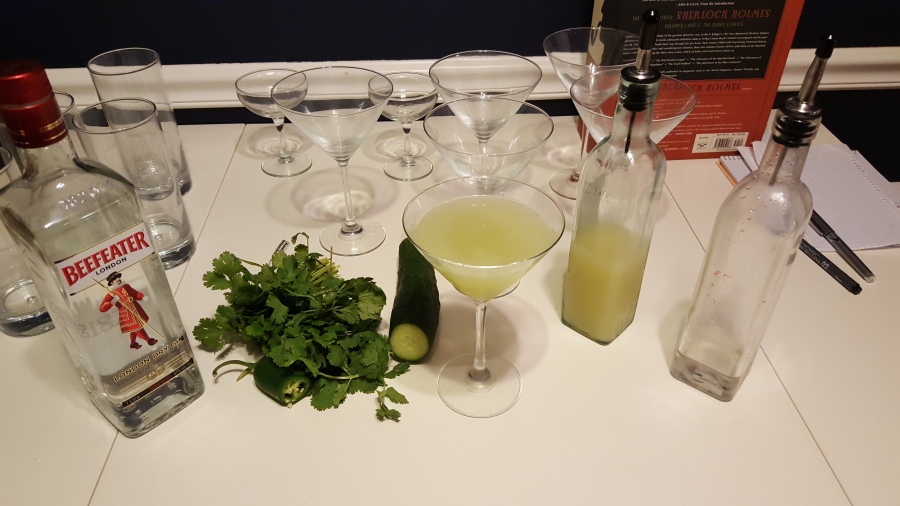 For this week’s book review I read Nisid Hajari’s “Midnight Furies,” a brilliant history of the bloody partition of India and Pakistan.  This was a subject I was mostly ignorant of, so I was stunned at how deftly Hajari’s narrative introduces newcomer like myself while providing advanced research and analysis that I think will appeal to specialists.  Hajari’s story is eminently readable, unfolding like a warfront newswire backed up with voluminous research, a combination that makes this book hard to put down. The book is at its most effective detailing the stunning waves of violence that tore the subcontinent apart as leaders such as Gandhi, Nehru, Jinnah, and Mountbatten struggled to find an accord that respected the aspirations of India’s diverse communities.  Hajari pulls no punches, testing any reader’s appetite for violence with gripping episodes of savagery and the sadly pedestrian story of peaceful mixed communities quickly turning to slaughter and genocide.  Above the violent din, Hajari weaves an intense political drama, painting a frustrating portrait of “great men” who were so paralyzed by their own personal rivalries and deep suspicions that they failed to staunch the rampant bloodshed, and often incited or ignored it when it suited their narrow agendas.  You’ll read of few heroes in this volume.  The book ends with the fascinating story of the battles over Kashmir, the bloody legacy of which haunts Indians and Pakistanis to this day.  Hajari’s work is popular history at its finest and most horrific, offering valuable insight into one of the world’s most dangerous and important flashpoints.