A welcoming Mosaic hangout replete with old-timey menus and classic movies playing all day, Ted’s is one of those special places you can have a quality cocktail AND milkshake.

You like the 50s, I like the 50s, Ted’s Bulletin likes the 50’s so much they built a restaurant dedicated to the decade.  From the kitsch-errific newspaper menu to the clever bathroom door signs (hint: make sure you take a second to confirm which one is the mens room), this relatively new addition to the Mosaic District exudes mid-century hip. Also cool: they have a movie screen in the main dining room where they show old moves; On the Waterfront was playing when I was there.  So the ascetic is pleasing, but what about the cocktails?  Ted’s drink weren’t all hits with me but the list carries some solid drinks that take some chances and excite the palate.

Let’s start with the “Red Jacket” which features Appleton VX, Grand Marnier, raspberry & lime.  It all comes across with a severe burn and a hard learning curve — an interesting taste, fruity, but nothing revelatory.  Next up was the “Midkiff” – Bombay Gin, honey lavender syrup and lemon juice finishes very well with a nice rich lemon bite that is even throughout.

Moving on, we get more intense with the “Big Ugly” which lives up to its name — a HARD punch to the face with Maker’s Mark Bourbon, Luxardo maraschino liquor, sweet vermouth and angostura bitters.  Intense with no pretense, the bourbon comes across hard, but it wasn’t bad at all and the front was pleasant.  An experience, I’ll say that :). I switched to the far more relaxing “Jane Lew” made up of Hendrick’s Gin, cucumber mint syrup, lime juice & angostura bitters.  A nice and heavy drink, this one comes across thicker than most gin/lime-based cocktails.  Interesting.

I rounded out the good times at Teds with the “Williamson Fig” which as Skyy Vodka, raspberry syrup, sparkling white wine and fig marmalade poppy — this was a little to sweet, a good burn on the lip that descends into an odd-tasting mix of berry and the wine.  I saved the best for last with the “Lincoln County” made of Skyy Vodka, rosemary-blackberry syrup and sparkling white wine.  A very unique and attractive taste, sharp at first but nice, fruity, and refreshing as it goes down.  The basil garnish is an interesting addition and really adds to the flavor.  Very creative, liked this one.

It hit me when I was at Ted’s that I should start putting some effort into talking about the books I read when I drink.  Books have always been a welcome stalking horse of my cocktailing, adding some focus, class and, you know, book learnin’ to my alcohol research.  It’s funny, some books just seem to work at the bar, while others fail.  Can’t say I’ve identified a precise “type” that always as I’ve enjoyed–and disliked–a variety of genres while sipping. 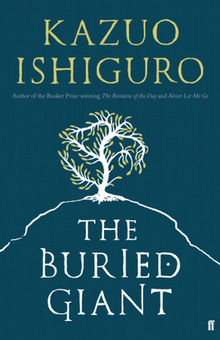 At Ted’s (and other places) I read Kazuo Ishiguro’s 2015 “The Buried Giant.”  Ishiguro’s “Remains of the Day” is one of my favorite novels of all time, so I went into this with high expectations.  Wouldn’t say Buried Giant approached it, but its challenging narrative and truly beautiful prose makes this worth reading.  The exceedingly complex storyline centers around two elderly residents of post-Roman Britain who head off on a journey to visit their son.  Their motivations, travel partners, and intent shifts from page to page as their memories pinball; the resulting puzzle will challenge most readers (especially after a few martinis) neccesitating more than a couple jump-backs and reviews.  Even the most dedicated Ishiguro fan may soon tire of the enigmas and shifting story, but I’d recommend pushing through, as I found the conclusion and its lessons fairly rewarding.  The charm of the book is not so much in the narrative but the otherwordly descriptions of Britain’s fog-drapped landscapes and colorful residents.  After a cocktail or two, the book will read metaphysically, which I enjoyed.  Mix something strong and give this a whirl.