Ah Annapolis.  Babylon by the shore.  The capitol that almost was.  The setting of the 90s classic Patriot Games.  And an all-around great place to visit.  I’ve always enjoyed Maryland’s state capital and its nautical/party vibe, including the annual croquet match held at St. Johns College, which is a must for Great Gatsby fetishists.  It’s been a while, so I thought I’d venture forth once again, this time in search of great cocktails.  Employing a sophisticated research model — Googling “Annapolis” and “cocktails” — I found two fun places while happily stumbling into a third.  To a place, they featured good liquor, good people, and good times.

First up was Metropolitan Kitchen and Lounge for brunch.  Unfortunately, because of the early hour, I wasn’t exposed to their full cocktail list, which I hear is AMAZING.  Still, this truncated safari was delightful.  The bar is very welcoming and clearly is a favorite among the colorful locals, which is a good sign.  I started with the Acai Relief, which brought blueberries, Van Gogh Acai Blueberry Vodka, lemon, and lime; it came across as a vitamin-C heavy, relaxing, fruity concoction with a strong blueberry kick.  Aces. I then moved to the Cucumber Moon – cucumbers, citron vodka, lime, and elderflower mixture which was a good, strong cucumber drink, very fresh, a nice Sunday sipper.  Finally, I had the Orchard Mimosa, which uses apple cider in lieu of vodka.  I really liked it, it dialed down some of the “pop” that often ends a conventional mimosa, offering a smoother, earthier drink.  Probably the best endorsement of this drink was my downing of three of them.  Finally, the bartender was also delightful and extremely responsive!  I will return, later next time!

After about three hours of walking around town in the heat, Blackwall Hitch rose like a watering hole in the desert, capable of satisfying a suffering caravan.  Or me.  A nice bar restaurant with an arsenal of simple and cold cocktails, I started with a standard Collins it was simple and refreshing, doing what it was intended to.  Then I had a mint julep which used gin — it was an awesome, sweet interpretation of the classic.  I had to work hard not to swallow it down in a few fell swoops!   Finally, the grapefruit crush was a bit of a let down, mostly because it had grapefruit, of which I’m not a fan.  This drink was ok but the grapefruit flavor overpowered everything else.  Of course, if you’re a grapefruit aficionado, this will be right up your alley.

For dinner, I stopped into Level, a well-appointed small-plate joint that promised unique cocktails – man o man, did it ever deliver!  I started with the aptly named “Shot and a Beer” with el jimador tequila w/green sangrita and a modelo bottle; I felt a little embarrassed to ask how one drinks this — I was told that some brave (insane) folks down this in one gulp, while others sip – I chose to sip.  I was happy in my choice, the tastes, while on fire, worked perfectly off each other and bounced around with sheer pleasure.  Loved the burn, loved the creativity.  Next up was the “Berry Mangalow” — the recipe isn’t on the website, but this was a bit off at first but grew on me, I found it interesting and admired the risky combination.  But all of this was simply an appetizer leading to the best drink of the day, the “Level Gimlet.”  Oh man was this the bees knees.  Finlandia vodka, fresh lime, sugar cane, and luscious, beautiful lime foam combine in a superb, almost milkshakey masterpiece.  Honestly, I’m glad I had this last because I knew to stop — unburdened by time, I may have devoted an entire day to this beauty.  Just delicious. 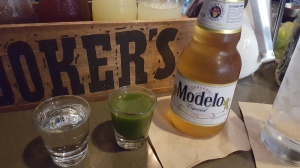 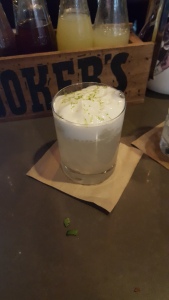 So there you have it folks, a wonderful day, well spent imbibing at Annapolis’ finest watering holes.  If fortune favors you and you get a chance to hop on over, do yourself a favor and hit up some of these great cocktail spots!

"It would be the saddest thing to me, princess. To walk separately from you, when the ground will let us go as we always did." Trying to get all those DC Michelin stars in before the move, and @cranesdc didn't disappoint - this is "The Rose Garden" with cava, aperol, lemon, pomegranate, and cava foam.
"Whatever satisfies the soul is truth." As my time in DC grows short, I'm taking the time to visit the stalwarts of the scene - always a fun chummy evening at Off the Record. This is a "Pear Martini" with @greygoose, St.Germain, Chambord, and pineapple juice.
"I may be drunk by morning but that will not do any good. I shall take the train to Paris anyway." Echoes of cozy Paris @lutecedc, this is the "Club de Trefle" with gin, blackberries, and lime.
"It was the kind of town that made you feel like Humphrey Bogart: you came in on a bumpy little plane, and, for some mysterious reason, got a private room with balcony overlooking the town and the harbor; then you sat there and drank until something happened." Run, don't walk to @stjamesdc - killer food, including some of the best jerk chicken I've ever had. This baby is the "Pineapple Chow" with white rum, pineapple, lime, pepper, and shado beni.
"...an America fervently devoted to the quaint goals of working together and getting along. Of course, this America does exist. It's called Canada." Had a wonderful weekend in one of my favorite cities, Montreal. Among other things, I got to sip custom cocktails at the spectacular @thecloakroombar and attend my first @f1 grand prix - can't wait to return.
"There was another life that I might have had, but I am having this one." Visited the splendid @shotodc and enjoyed a "Lychee martini" with gin, sake, lychee, and lime.